Welcome back to the 12-Month Produce Challenge! If you are just joining us, you may want to head on over to THIS post first to get all the details of the challenge. Then you can come back and find out what the vegetable of the month is and get started adding variety to your family’s diet.

Essentially, the point of this challenge is to become better at giving our families a variety of fruits and vegetables. Sometimes I think we get stuck eating the same foods over and over, but our bodies crave a variety of foods for optimal health.

Other reasons to do this challenge are to eat in season and to discover new ways to enjoy foods that we might normally shy away from.

We didn’t start the challenge until the middle of January, but it still gave us plenty of time to incorporate parsnips into a few of our meals. 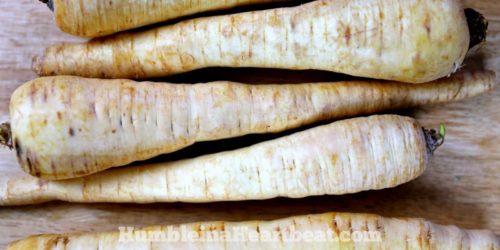 Parsnips are not exactly a vegetable that have always been on my radar. I made parsnip puree for all three of my babies, and I tried parsnips myself just one time before the challenge. Basically, they were the perfect veggie to start off the challenge, at least for me, because I rarely feed them to my family.

My Inhibitions About Parsnips

There are quite a few reasons why I shy away from parsnips.

First, they are expensive! I try to avoid buying produce that’s more than $1.50 per pound, but I made an exception for this challenge.

Second, parsnips have this woody core that some instructions say to remove before cooking and others don’t even acknowledge it. For the challenge, I left it and we had no issues.

Finally, I get weirded out by the smell of parsnips, whether raw or cooked.

How I Incorporated Parsnips in Our Meals

It seems like parsnips are used in one of two ways, for the most part: either roasted or in soup. So I decided to try both ways.

My favorite way to eat the parsnips was roasted, especially the recipe that had honey because they brought out the sweetness in the parsnips.

My least favorite way to prepare and eat parsnips was in soup form. Maybe it was the recipe or the fact that I kind of burnt some of the veggies as they were roasting before I pureed them, but I just didn’t care much for the soup I made.

These are the 3 recipes I used: 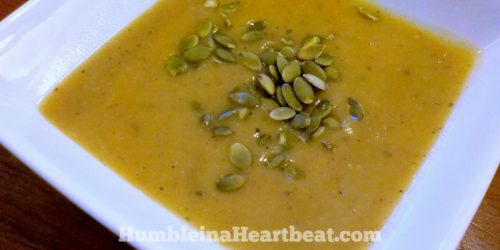 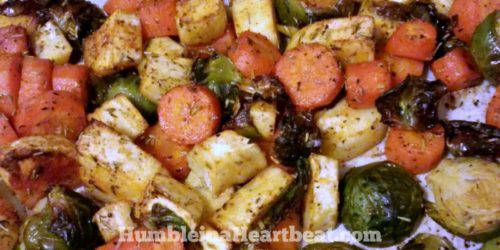 How Much Do Parsnips Cost?

As I mentioned before, parsnips are not cheap. The lowest price I found during this challenge was $1.98/lb, but they didn’t look very fresh so I skipped over them. I had to pay $2.79/lb each time I bought them because they were the freshest looking ones I could find. Maybe if I went to my local farmer’s market they’d have fresh parsnips, but I’m sure they’d be even more expensive that way. 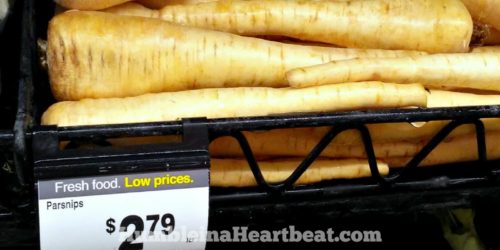 My Family’s Honest Opinion About Parsnips

Overall, I don’t think my family was really into the parsnips. That’s okay, though, because we only tried them a handful of times. I also think it’s perfectly fine to not like a food but give it a try each time. We all have foods that we can learn to like.

I was the only one who liked this recipe. My husband was excited and thought that the parsnips were potatoes so he popped one in his mouth and realized it wasn’t a potato. Ha! I really liked that the sweetness of the parsnips and carrots came through because of the honey on them.

Like I mentioned above, this soup wasn’t my favorite. My kids weren’t really into it either. However, my husband and my mother-in-law both ate it and liked it. My husband even had two servings. I think the reason he doesn’t like parsnips is because they are a sweet vegetable. He doesn’t like sweet potatoes or carrots that much and they are both sweet veggies. This soup did not bring out the sweetness of the parsnips. It had lemon juice and onions, and they actually muted its sweetness. So I think he liked it because it wasn’t sweet.

Everyone ate these veggies just fine, but my husband did voice his opinion quite clearly: he wasn’t into the parsnips. My 4 year old helped me make them, so she seemed the most excited to eat them. My 5 and 4 year old girls both ate them down and then went over to the sheet pan after they finished their dinner and started picking more off to eat! My 1 year old seemed to like them at first, but as soon as he saw the chicken, he was over it. That’s how he is lately. If he knows there are more tasty options at the table, he wants nothing to do with the veggies.

Parsnips are at their peak in fall and winter and will definitely taste sweeter and better if purchased during those times. Choose parsnips that are small vs large because the longer and bigger they get, the more of a woody core they get.

Keep parsnips in the crisper in your fridge. Wrap them in a paper towel and put in a plastic bag to retain moisture. They should last a good two weeks if you store them this way.

You may remove the woody core if you like, but it’s not completely necessary (at least from my experience). For most recipes, you just need to peel the skin and then dice into the size they need to be.

Parsnips, just like many other fruits and vegetables, have plenty of fiber and anti-oxidants. To read all about the nutrition benefits, go over to this article on Dr. Axe. 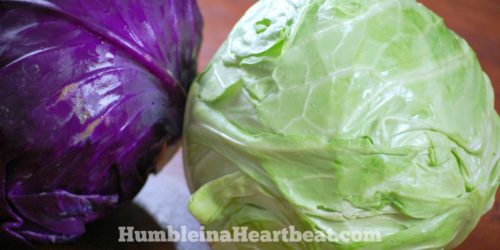 It’s the beginning of February, so it’s time for a new fruit or vegetable of the month!

I have decided to add cabbage to our diets this month. We will be using both red and green cabbage, and I’ve already got my meals on our meal plan for the month. I got so excited when I was searching for recipes, and I wanted to try most of them. So we have at least two recipes per week that we are going to try so we can get lots of cabbage in our bodies this month!