This post contains affiliate links. I only recommend products that I personally use and believe will add value to your life.

If you have very little time to spare and want to cook healthy, homemade meals, it’s imperative to prep ingredients quickly! Find out now how to chop onions faster!

Chopping onions has to be one of the most grueling tasks in the kitchen. I am not a fan.

You might guess that the reason I don’t like this basic kitchen task is because of all the tears I’ve shed while onions have been on the chopping block, and you’d be right.

Chopping onions is like cleaning the toilet; it’s a task that has to be done but nobody wants to do it.

Am I the only one who absolutely despises this mundane kitchen chore? Absolutely not. I’m positive that I’m not alone. I mean, why else did you click through to read this post?

Chopping onions shouldn’t be that hard, really. But each and every time I know it’s time to get in the kitchen and cook, I find myself crossing my fingers that there are no onions involved this time. Do you do the same thing? 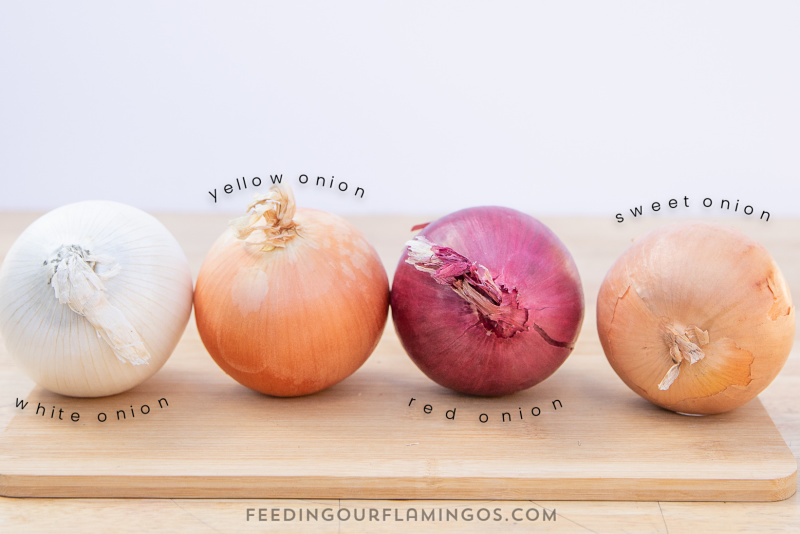 It Doesn’t Really Take That Long to Chop an Onion…Or Does It?

The question I had for myself recently was, “Why do you hate chopping onions so much when it takes less than 2 minutes to get it over with?” And that’s when I realized I didn’t really know how much time it was taking me to chop onions. Maybe it actually takes longer than that and my sense of time has been distorted.

I had to find out for myself.

I decided to do a very unscientific experiment to find out just how long it takes to chop an onion.

After I chopped 18 onions and suffered through fewer sobbing sessions than I can remember with onions, I’ve come up with a few conclusions about the best way to chop an onion, both for speed and to avoid crying.

Just to Be Clear…

You can chop an onion as slowly or quickly as you’d like. But for someone who has very little time to spare and wants to cook healthy, homemade meals, it’s imperative to prep ingredients quickly. If it takes a while to do basic prep, like dicing an onion, it’s easy to give up after one or two meals and go back to eating convenience foods. 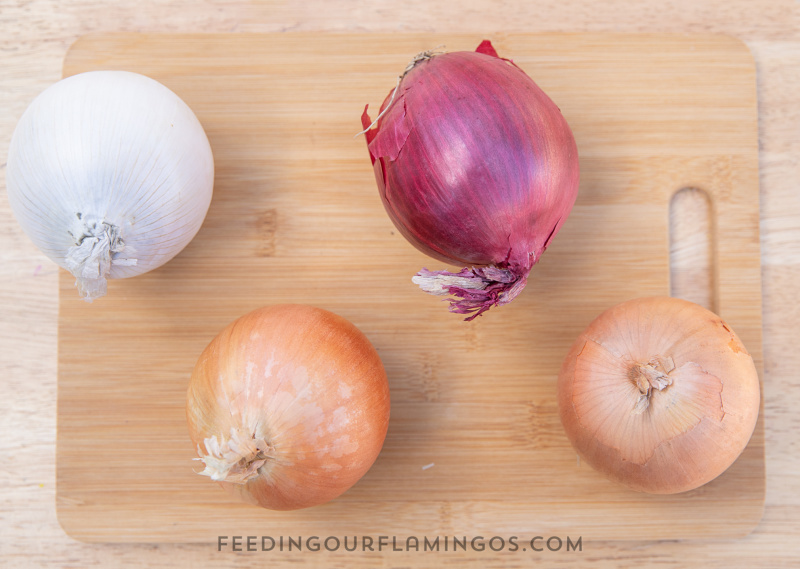 Watch out for those tears!

You don’t have to suffer through chopping an onion. There are things you can do to minimize or even prevent tears. If you avoid chopping onions simply because you don’t want to cry, try one of these strategies and see if it helps.

1-Get the onion cold before you start dicing.
2-Light up a candle and place it near your cutting board while you chop.
3-Cut the onion outside on a windy day (I just discovered this one when I was getting pictures for this post).
4-Wear glasses or special “onion goggles.”
5-Learn how to cut the “right way” to reduce the amount of time you are actually cutting the onion.
6-Use an onion chopper or food processor.

Before we go on, I’d like to mention that, just like you should never drive drunk, you should never chop an onion while crying. Your vision is impaired and you could really do some major damage to your fingers!

Back to the Experiment…

Now I’ll go ahead and share the results of the experiment below, so grab a bowl of popcorn and read on…

If you just want to find out the results, skip to the section that says, “So what’s the absolute best way to chop an onion fast?”

As I pondered how to go about this experiment, I figured it would be best to do it by kitchen tool. I did the experiment using three types of circumstances:

For each scenario, I chopped 6 onions to find an average amount of time it takes to dice.

I started timing from the moment I cut into the onion and I included any crying time that occurred. As soon as the entire onion was chopped, I turned off the timer. 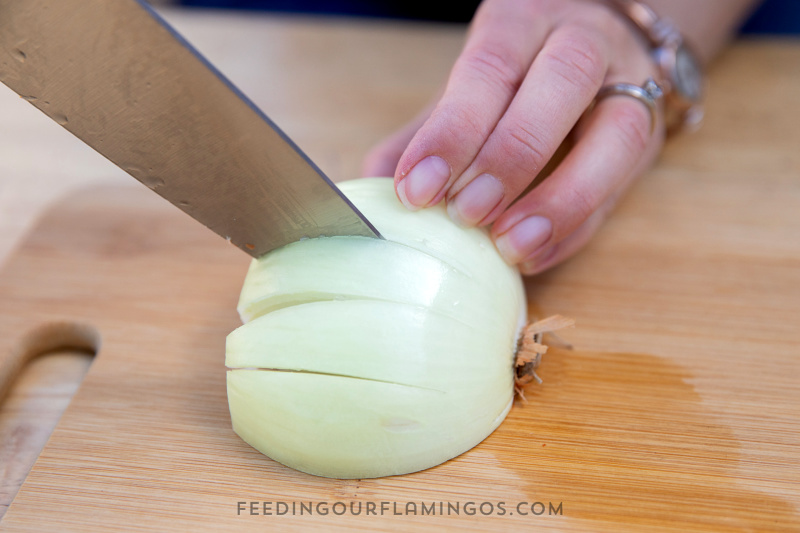 When I first started the experiment I was dicing each onion the way that I normally do it (or used to do it), which is doing one horizontal slit down the middle followed by vertical slits before dicing. But after doing some research, I found out that’s quite inefficient for a home cook, so I switched over to cutting each onion with slanted vertical slits, as explained in this video.

After each time I chopped an onion, I wrote down 3 things: the amount of time it took to chop it, whether there was any crying, and the size of the onion.

How Long Does it Take to Chop an Onion Using a Dull Knife or the Wrong Type of Knife?

For this part of the experiment, I used a dull knife to dice 3 of the onions and a utility knife (instead of a chef’s knife) for the other 3. I chopped one small, two small-medium, two medium, and one large onions.

That’s just a tad too long to be chopping an onion, don’t you think?

Is it Really that Bad to Use a Dull Knife for Chopping Onions?

Using a dull knife or the wrong type of knife to chop onions is not only dangerous, but it increases the amount of time you spend chopping the onions and makes you cry more since it takes so long. And you know once the tears start streaming, you’ll be spending at least double the time chopping that darn onion than you’d like.

If your knife slips and slides as you try to chop your onion, you’re likely dealing with a dull knife. Do yourself a favor and a) try obtaining a sharp, chef’s knife or b) use an onion chopper or food processor to chop your onions. You don’t need to sacrifice the tips of your fingers in the name of a chopped onion.

How Long Does it Take to Chop an Onion Using a Sharp Knife? 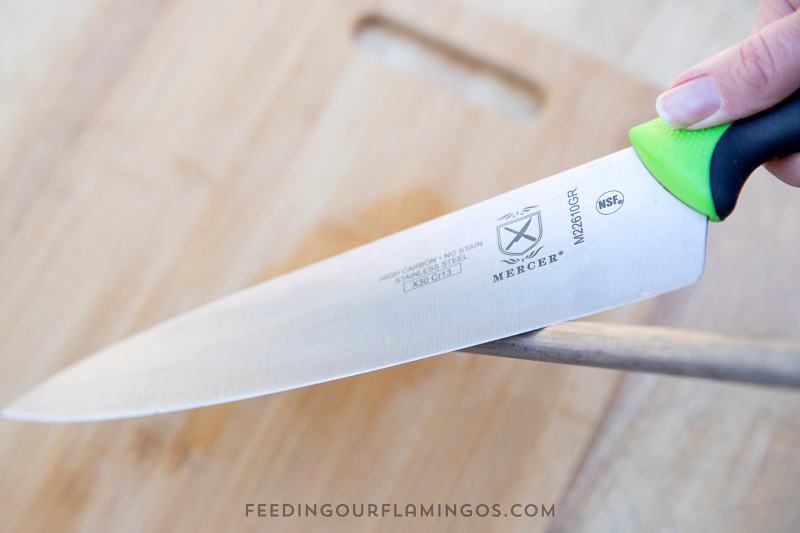 That’s a good 30 seconds to one minute advantage over using a dull knife! 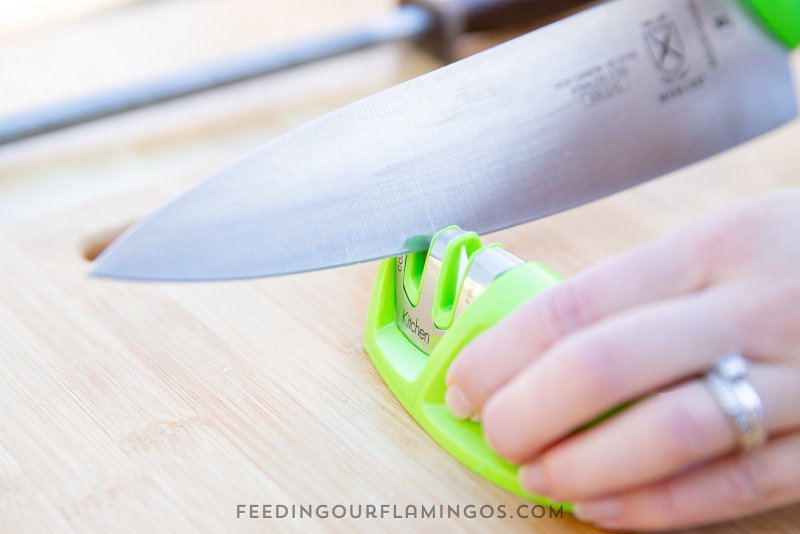 How do I sharpen my knife?

I’m just certain you want to read even more about sharp knives. 😉 If so, you can take a look-sy at this fascinating article about sharpening knives.

If you’re in a position where you really need a sharp knife, like yesterday, and you don’t have a proper tool to do it, you can use common household items like a ceramic coffee mug to help a sister out. Go ahead, read about the 10 everyday objects you can use to sharpen a knife. I dare you.

Searching for a new knife for chopping? I recommend getting an 8-inch chef’s knife (this is an affiliate link). The one shown in the pictures is a 10-inch and is probably just a little too big for onion cutting (but it works fine for me since I’m so used to long knives).

How Long Does it Take to Chop an Onion Using an Onion Chopper?

The final method I used to chop up my onions for this experiment was an onion chopper. I chopped three small, one medium, and two large onions. 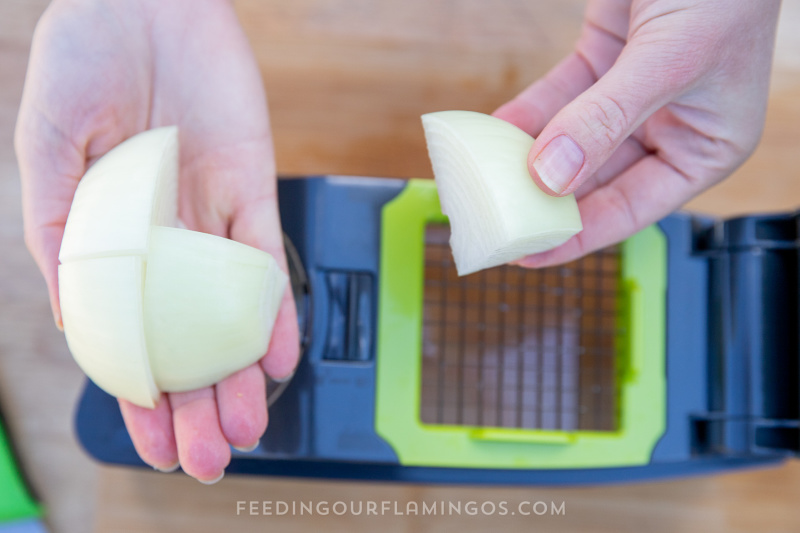 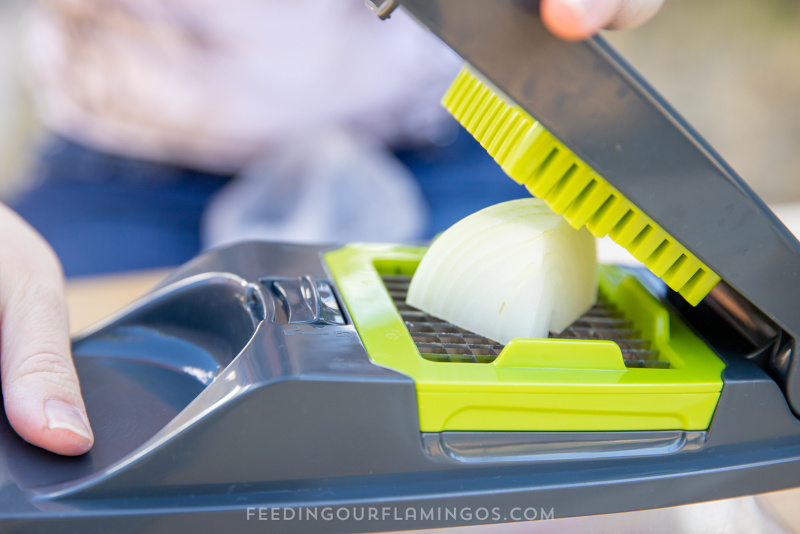 Another huge plus to using an onion chopper is that there is practically no crying. Out of the 6 onions I chopped with the onion chopper, none of them made me stop the task at hand and leave the room because of tears. I felt a little stinging after chopping so many at once, but it was nothing compared to what normally happens when I dice just one onion. 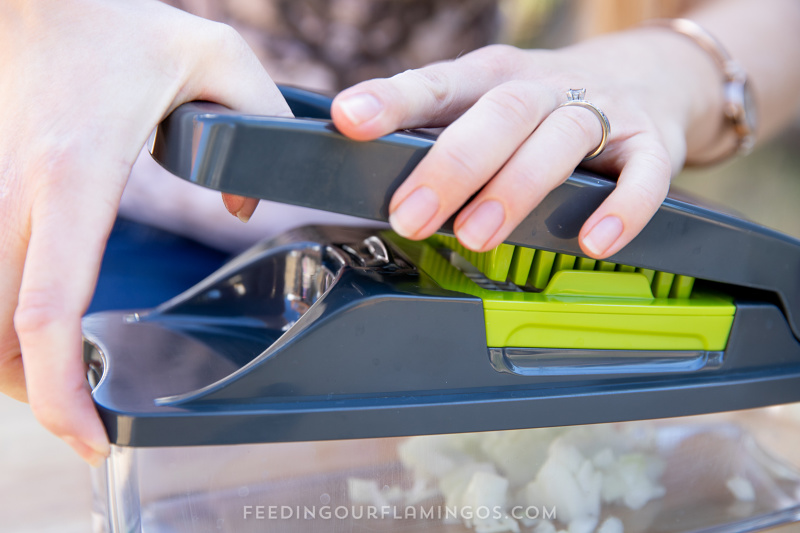 Before you run out and buy yourself an onion chopper, you need to know the downsides first. I have found that while it chops onions very quickly, you have to spend some time getting small pieces of onion out of the blades. When you cut with a knife, you generally only have to rinse the knife and all the onion comes off. But with the onion chopper, it really takes some extra effort to get all the onion out of the nooks and crannies. I do all my dishes by hand, so maybe this would not be a problem for the dishwasher, but I don’t know about that. 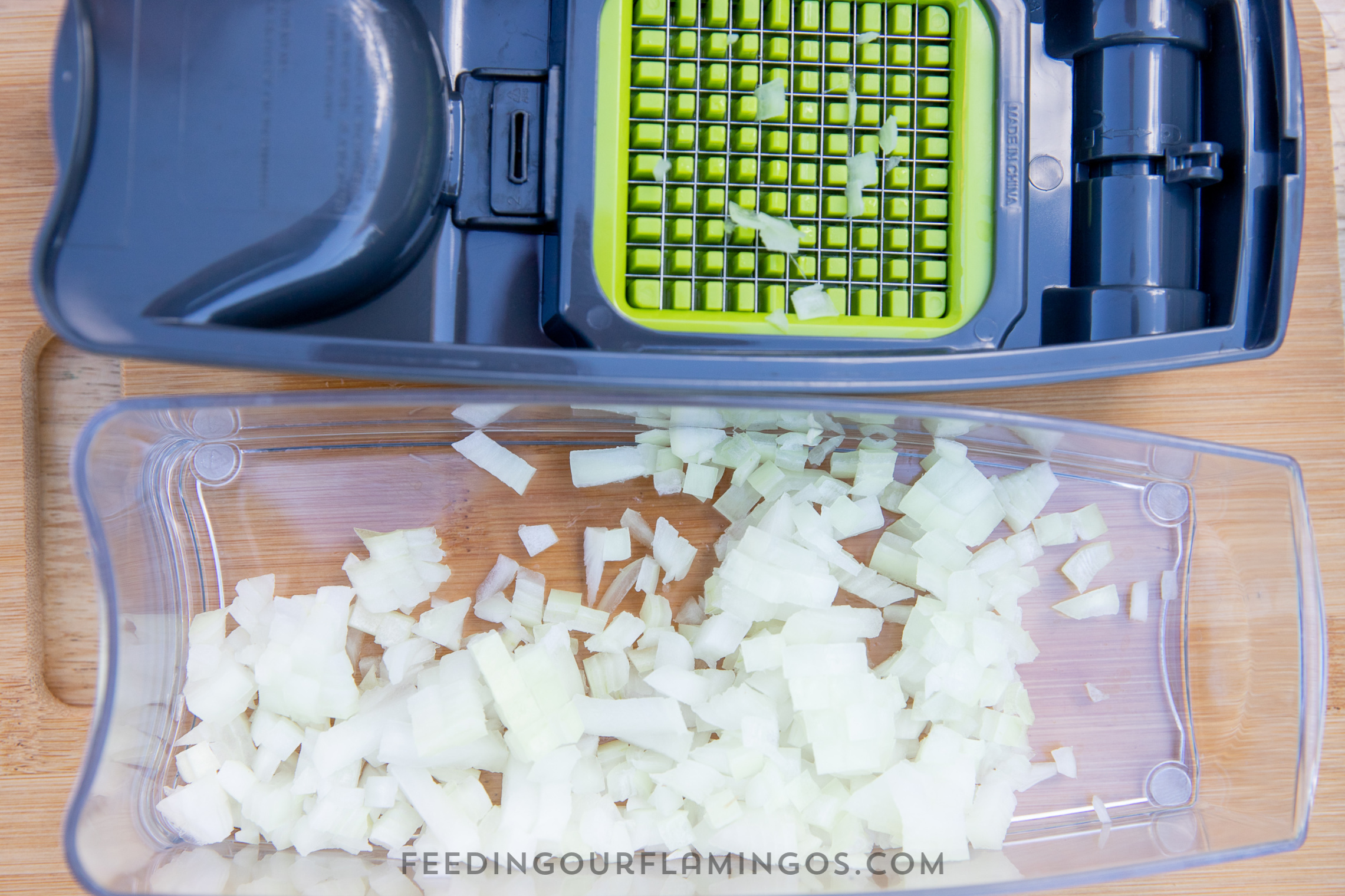 For this reason, I only recommend using an onion chopper if you have to chop several onions at a time.

The onion chopper I own is pretty basic (affiliate link). There are two options for the size of dice you want and that’s it. I use it for both onions and bell peppers, but you can also use it for other vegetables, fruits, and even cheese. You can find more options from other choppers, but I figured the one I bought would be a good starting point to see if I used it enough to warrant an upgrade to another kitchen tool.

So what’s the absolute best way to chop an onion fast?

If you want to quickly and efficiently dice your onions and avoid tears, use an onion chopper (that is, if you don’t mind washing a few extra kitchen tools). You should also use an onion chopper if you need to chop several onions at a time. I used to own a food processor and used it a few times to chop onions, and I’m quite certain it would be faster to use a food processor than even an onion chopper. However, in my experience, the onion gets a little “blended” and the juices really come out of the onion, so it’s more ideal for using in salsa. However, this article on epicurious claims that you really should just use the food processor if you plan to chop a lot of onions at once. But for one onion, don’t bother.

If you don’t have an onion chopper or a food processor, just make sure you have a sharp chef’s knife at the ready, and make several slanted vertical slits in the onion like in this video. You can use any of the tips for avoiding tears (under “Watch Out for Those Tears!” near the top of this post) if you tend to be a slow chopper.

If I Were to Do It All Over…

I did tell you that this experiment was very unscientific. The major problem was that not all the onions were the same size. In other words, they were not controlled. If I were to do the experiment over again, I would choose onions that were all the same size.

My hope is that my little experiment will help you discover the best way for you to chop onions faster. Busy home cooks are placed under a lot of pressure, and easy and actionable kitchen hacks like this one can really make a big difference over time. 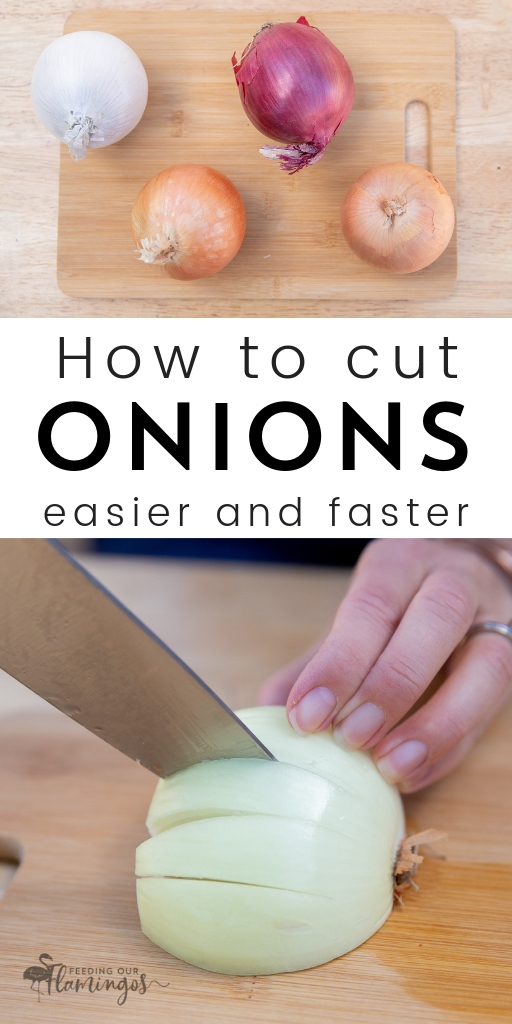